The World Premiere of Miners Shot Down in Prague

I landed in Prague for the world premiere of Miners Shot Down and was whisked off to the Festival office where I met the guest coordinator, the press liaison officer and a host of other friendly festival staff. This was quickly followed by a TV interview, and a print and radio interview, all of which were conducted very professionally.

Rather exhausted from the flight, I headed back to the hotel for a rest, only to discover I had to be at the cinema where the opening night ceremony was to be held, in an hour’s time.  The cinema is inside what was once a beautiful designed theatre from the era of the Hapsburg Empire. It seats 450 people and sports a huge screen with picture quality par excellence. I was then informed that this is only one of two openings – there would be another public screening, which is where the Q&A would take place. 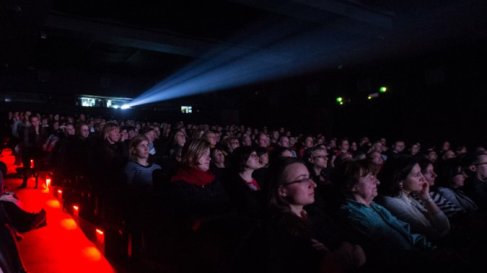 I am invited to speak at the opening ceremony, what do I say? Lucky enough I have a story that I would like to relay. The core of it goes something like this…

In 1977, my father relayed a story to me about his own political history as a word of caution in relation to my recent involvement with a far left socialist group in the UK.

“The communists can be very dogmatic, you need to be careful. In 1968, Dubcek’s Prague Spring brought a liberalization of the socialist Czechoslovakian state and the Soviets that had rolled into Czechoslovakia, pushed back. He was carried away in chains and I cried and cried that day. That is when I finally turned my back on Soviet-styled communism and the South African Communist Party, for good”.

The Marikana massacre was to me, and I dare say to hundred of thousands of others, a similar representation. The moment the ANC turned the guns of the state on its own people, from that point on, there was no going back.  Overnight, African Nationalism had become a reactionary force.  It may be simplistic, but there is real emotive truth in what I say and this means that we have a shared history.

At the public ceremony Q&A, the 200-seater cinema was packed! The questions were focused and generally pointed to the ‘why and how’, as well as looking into the response of the South African people to the killings. I tried to keep my answers short and specific to the massacre, but this proved a challenge. However, most of what I said seemed to strike a note with the generally young audience, most of whom were under 35.

At the after party scores of people approached me, many visibly emotional about what they had seen, and expressing their disappointments in SA after having so much potential in our country. It became clear to me that this event belongs to the world. If the film is eliciting this kind of response from one small corner of the world, it is clear that the outrage will be shared by millions of people from all corners.

“The cold-blooded murder of workers for simply going on strike belongs to the beginning of the last century and the century before that. How can this be happening in today’s world? I am ashamed that this can happen.”

That night this was said to be in one form or another, time and time again. It affirmed that we are not alone. We will never be alone.